Following the construction of the green in Horsham Park by Horsham Council, the possible formation of a new bowling club was advertised in the West Sussex County Times in 1967.

About 20-30 people turned up. A steering committee was appointed to get things going and possible officers were discussed. The Horsham Park Bowling Club was formed with Robin Peters as Secretary, who at that time was 25 years old. Other founder members were Robin’s father, mother and uncle. He is the only surviving founder member of the original club.

The Club started playing in May 1968 with a few matches against local clubs. The Club was formed as a mixed club from the start and nearly all matches were mixed even though, at this time, many bowls clubs were not playing mixed matches, treating their women members as “second class”. In 1968 nearly all the matches were played wearing grey and a lot of players were still bowling with lignum woods. 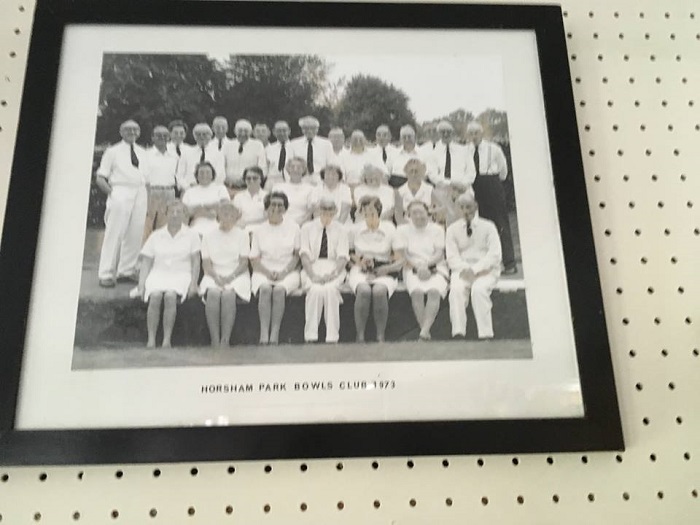 In 1968 the Club subscription was 10 shillings (50 pence) but a playing season ticket had to be purchased from the Council in addition. The only accommodation at the green was the building which now houses the lockers etc. and everything, including teas, had to be carried out there.

In 1968 the Club committee requested that a tarmac path be built down behind the tennis courts for visitors to the Club, and that some car parking be provided, as this was vital to the future of the Club. These requests have been repeated many times over the years but there have been no results so far.

In 1973, Horsham Park Bowling Club was joined by Warnham Comrades Bowls Club in a ground sharing agreement, as Warnham Comrades had lost their 2-rink green in Warnham after playing there since 1934.

In 1990, management of the premises and maintenance of the green was taken over from the Council by the Joint Management Committee of the clubs. For about 10 years, the two clubs continued with this mutually beneficial sharing arrangement. However, by this time, both clubs were experiencing a drop in membership numbers and were finding it difficult to in fulfil all their fixtures. So, in 2002, the clubs agreed to amalgamate to form Horsham Park Bowls Club playing under the Warnham colours, the first playing season being 2003.

The amalgamation had proved to be a great success and has enabled both clubs to move forward as one. The Club flourished, with a membership 80 full-playing members and 20 associate and life members.

Horsham Park Bowls Club now has a small membership of about 35 playing members and over 20 associate, social and life members.

The Club now plays most days of the week playing friendly matches against 40 different clubs as well as league matches in the Border League, the Mid-Sussex League and the Nellie Mercer League.